But do we really know the differences for us to make a wise decision?

While smoking cannabis has been around for ages, vaporizing marijuana (“vaping”) is a relatively new way of in-taking the ancient plant.

And with anything new, comes along a whole host of uncertainties and questions.

If your one of the many who carries such questions about vaping vs smoking weed, then, these list of answers are probably what you’re looking for.

So without further ado, let’s explore the facts as we answer the top five questions about vaping vs smoking weed. 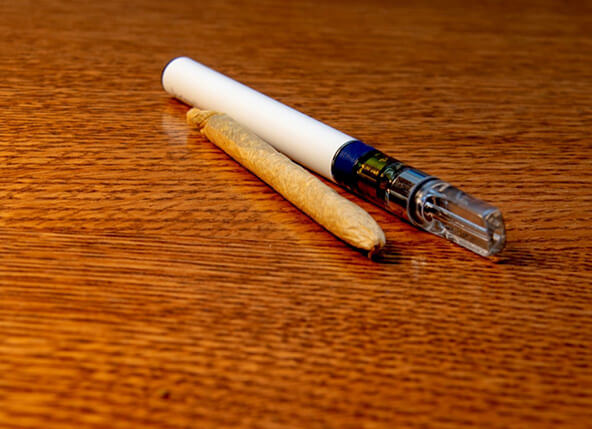 When you smoke cannabis, there’s combustion or burning taking place. On the other hand, vaping weed heats cannabis without burning. Instead of smoke, your vaporizer creates mist-like vapor, either through a conduction or convection heating method. What each heating method does is release the therapeutic ingredients in cannabis, further mixing such ingredients into the fine vapor mist that’s inhaled by our lungs.

Related Article: How to Vape Weed Correctly in 4 Easy Steps

2. How Does Cannabis or Cigarette Smoke Affect My Health?

Smoke is still smoke, regardless of what you’re smoking, and cannabis smoke, whether first-hand or second-hand, can be just as harmful as cigarette smoke.

While smoke has many negative effects, it’s particularly tough on a person’s cardiovascular system. Toxins make blood vessels work harder; the toxins block and then unblock the arteries, so the vessels are continuously enlarging to handle the blockage.

As for vaping weed, what does the research say? Does it reduce the ingestion of harmful toxins like tar, ammonia, and other carcinogens found in cannabis smoke?

The gases and particulates in smoke create lung irritation and make respiratory problems worse. Smokers have more bronchitis and respiratory issues than the general public, and many medical patients who use cannabis for a respiratory disease don’t want to smoke because it’s so irritating to their lungs.

These patients prefer vaporizing marijuana, but is it actually healthier? While more research on vaping weed is needed, the initial studies that have been done seem to indicate that it’s less harmful than smoking because combustion is not involved.

In fact, one of the first studies to compare smoking to vaporizing marijuana showed fewer respiratory effects with vaping, based on self-reporting of respiratory symptoms. Another study showed that carbon monoxide was greatly reduced in vaping weed versus smoking it.

Vaping offers other benefits as well, such as the lack of the smoke smell, better taste, discrete use, and a more economical use of cannabis – meaning less cannabis generally produces more effect with vaping.

Related Article: Advantages and Benefits of Vaping Cannabis Over Smoking

Yes, temperature definitely matters. In fact, temperature makes all the difference between vaping and smoking marijuana, and cannabis vaporizers are specifically designed to operate at certain temperatures to ensure inhalation without harmful smoke toxins.

Vaporizers heat cannabis to temperatures just below combustion, which occurs at around 450 degrees Fahrenheit. Interestingly, scientists have determined that different cannabinoids have different ideal “release” temperatures. At 392°F, THC and CBD become active compounds, but some compounds like cannabichromene (CBC) become active at higher temperatures.